Over the past year, the world has started waking up to the fact that our societies are defined by their inequalities. For the first time in a long time, that fact united many of us across geography, class, and race. Here in the US we’re still working to carry forward the energy of racial justice activism that swept the nation in 2020, with the hope to create systems and encourage elected officials to work against inequality. The pandemic has widened and made more clear our view of inequity and this has informed a newly realized solidarity: our intentions and our lives have meaning, and we are tethered to each other through our humanity. Solidarity has become a theme and an ethical responsibility. Waves of activism have roiled communities across the globe as people have taken to the streets in protest of state violence, discrimination, economic inequity, political corruption, and much more. Protests were already occurring in Colombia but as they have resurged in the pandemic’s socio-political environment, it has been with a new, collective tenacity and as this ripples through global supply streams, we are taking the opportunity to examine our role and lend support.

Colombian coffee is on our single origin menu year-round (La Familia Guarnizo), and it’s also in The Daily for a majority of each year. Our business depends on those coffees, which are made possible by many smallholder farmer families in Colombia—we are inextricably connected with the people of Colombia through our business. Some of our most important lessons on the true meaning of “partnership” have been with the Guarnizo family in Huila, Colombia.

At Joe, we have come to appreciate the value of working with trusted suppliers for sourcing green coffee. We rely on the trust those partners have built with producers through long term relationships and we use those relationships to educate ourselves and our staff, and to gain more context for the challenges facing producers in a given area. When it comes to understanding this situation in Colombia, as well as seeing how and where we can contribute to positive change, we found ourselves in conversation with our supply partner there, Caravela, and the close partners they facilitate our work with, the Guarnizo Family, to learn about what prompted these protests and what they expect to happen. Wilmar Guarnizo explained that where his farm is located, along with his siblings’ farms, the food and gas supply has been disrupted. Thankfully, many of the staple foods are grown locally in their community. Wilmar describes a general feeling of disenfranchisement, explaining that they feel disconnected from both the protest movement and the government, neither of which have historically served them well. Marisabel Vasquez, Marketing Manager for Caravela, notes that the situation looks different across the country. In the city where she’s from, Barranquilla, protests have been predominantly peaceful. In other parts of the country, such as in Cali, Bogota, Huila, and Bucaramanga, the protests have intensified, and have been rippling out to affect each city’s infrastructure. In Bogota, where Caravela’s main offices and in-country QC lab are located, staff coming in to work have to pay close attention to the planned protests because public transportation shuts down during those times because buses get damaged during them. And of course, the main impact is the effect on their coffee business, which has been quite extreme. Coffees are being brought down from the growing regions to local purchasing stations, but because of roadblocks, they can’t move the coffee out of the individual localities. Marisabel shares:

“We continue with our warehouses open, but as we’re not able to move the coffee to the dry mill, there will be a moment when we run out of space (this happened back in 2016 when there was a truck strike) but we are trying to avoid this from happening. Additionally, we have not been able to move coffee to port, as you mentioned, the Buenaventura port is closed. Last week we tried moving coffee to Cartagena and Santa Marta ports in the Northern Coast (where as I mentioned things are much calmer up here) but containers are dammed and being held up and nothing has shipped. Our team in Colombia continues to work despite the challenges, but we really hope that we all come to a peaceful agreement, and that we can come out of this to a much better Colombia.”

We also checked in with one of our baristas, Oscar Gomez, who was in Colombia visiting his family and a business he recently started with his brother on a family coffee farm. He experienced protests and blockades while traveling across the city of Medellín, and was in the country for 6 weeks while the situation intensified. He shared with us that the government was limiting internet access in some places which was affecting people’s ability to communicate with each other, and also that it was an intense atmosphere. He was thankful to be with family, and told us, “it’s a shame how people fight for power and put so many innocent lives at risk for their own pleasure.”

We supplemented that perspective with our own research to see where major news outlets stand, knowing that international reporting can often come with political biases or contradictory, misrepresentative facts. That’s precisely why we feel the work of Human Rights Watch is so important; their nonpartisan work puts people first. Human Rights Watch is transparent about their research and methods, and they don’t take money from governments. Doing that means they have a wide, global scope and reach — they are more likely to positively influence the change that is needed to stop human rights abuses wherever they work. Starting June 16, we will donate $1 per sale of a retail bag of La Familia Guarnizo to Human Rights Watch in order to support the rights, respect, and humane treatment of protesters in Colombia, and to contribute to the visibility of their message.

Latin America is one of the most unequal regions in the world. The people of Latin America have a long history of political protest in response to inequality and the behaviors of their governing powers. Even so, there were more civil rights protests in 2019 across Central and South America than in any year in recent history. In Colombia in particular, there were protests toward the end of 2019 through early 2020 in response to high unemployment rates, high rates of poverty with a low minimum wage, little perceived upward mobility for young people (including a lack of state-funding for higher education), and police brutality. President Iván Duque stands for a new conservative, right-wing party (it was only established in 2014) that has come under harsh criticism since he was elected in 2018. These protests by the people began peacefully, but over time turned more violent: aggressive police intervention led to over a dozen citizen deaths and more than 500 injuries. 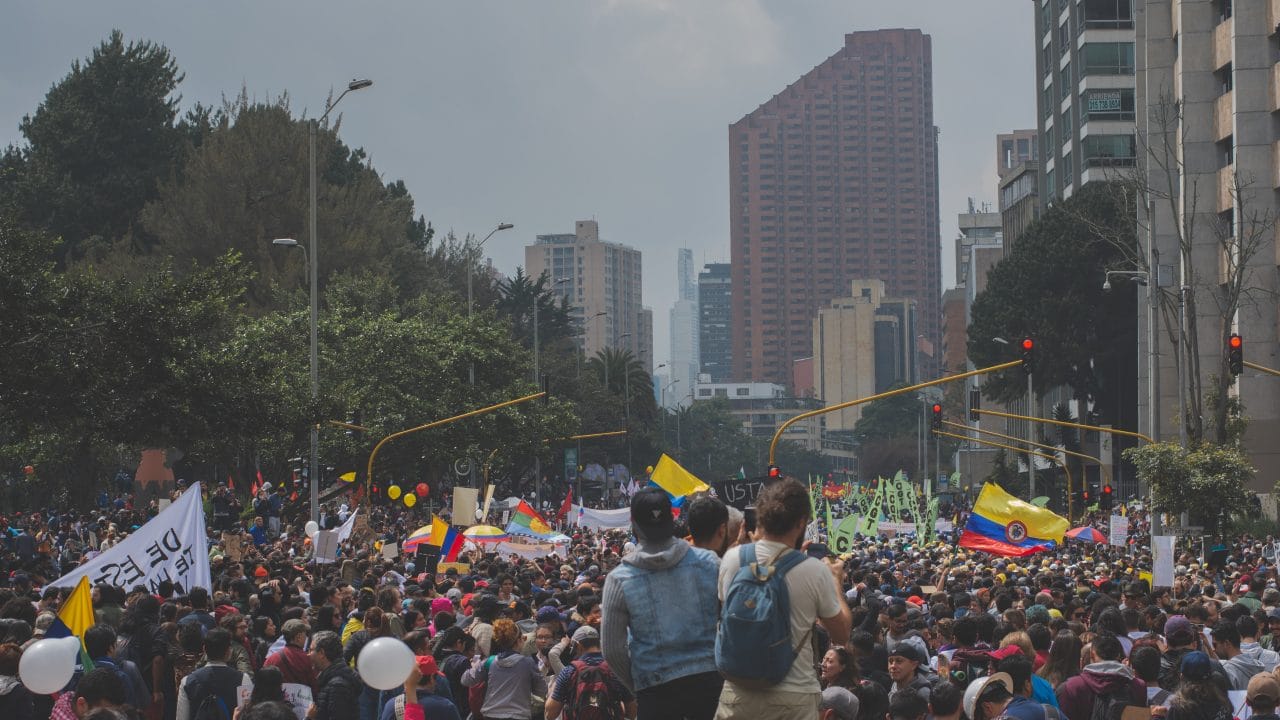 The rise of the pandemic and subsequent lockdowns paused the protests, but they started up again in late April 2021 in response to a law passed by the government to increase taxes (including a tax on consumable goods that had never been taxed before) to generate revenue for pandemic-related budget gaps. Throughout the pandemic, unemployment and poverty rates grew manifold and the government’s solution to improving social security only involved new and increased taxation. In a state of diminished resources, this didn’t land too well. Among fears of a worsening financial crisis that would spiral out of control, and from the poverty of economic desperation, the people of Colombia took to the streets to protest. After 4 days of peaceful protests, the president redacted the proposed tax bill, but by then, popular sentiment had shifted and all other inequalities and injustices came back into focus, especially with the perceived traction of having directly influenced the president’s economic policy.

Now, the protests became an issue of being heard: the social issues, income inequality, poverty, and corruption they’d protested years before intensified because of the pandemic, and the government hadn’t made any changes. The people’s request to have citizen representatives present in negotiations with the president was not accepted, so the public felt they had no other option but to continue to take to the streets in order to be acknowledged. This led to greater societal unrest: local groups funneled their frustration into blockades in their streets, towns, and regions in order to get their government’s attention. They wanted to prove that they were needed for a national economy to function properly, so that their worth could be felt by everyone, including at the international level. The government’s response has been severe, and police presence everywhere was expanded. At present, there have been over 40 deaths (mostly citizens) and over 800 injuries. There have been allegations of censorship, allegations of disinformation, and harsh critical reactions by many international governments. Though facts may differ depending on who is reporting, the common thread is the ongoing presence of injustice. Coffee and other exports continue to be affected by significant delays due to roadblocks and port closures but the people of Colombia are asking to be heard, and they are doing whatever they can to amplify their message. We stand in solidarity with the people of Colombia and empathize with their cry to be seen, to be heard, to be respected by those in power.

Most concise overview with context: An Update on Colombia’s Ongoing Crisis (Caravela)

Why Colombia’s protests are unlikely to fizzle out (BBC)

Amid Protests And Police Violence, Colombia’s President Condemns Blockades That Have Stopped Delivery Of Food And Medicine (Forbes)

Protestas – Colombia, “From cacerolazos to a neighborhood assembly” (Protestas Webseries)

Death of Colombian Teenager Drives Protesters Back to Streets (NYT)

The riots in Colombia hint at deep problems (The Economist)

The Rebellion Against the Elites in Latin America (NYT)

The Normalization of Protest in Latin America (Vanderbilt University)